2018 was the year Matchbox Cineclub stopped doing monthly screenings and ended up screening twice as many films. We launched three film festivals (even if one was postponed till 2019) and our online shop, coordinated Scalarama events across Scotland and organised a six-date tour of the UK. We hosted a world premiere, several Scottish premieres and a bunch of lovely guests, while a project we originated continued on to the Scottish Borders and Spain.

It hasn’t always been easy but we’re proud of what we accomplished this year, working with some incredible venues and a lot of our best bright and brilliant pals. We’re hoping 2019 will be our best year yet, but it’ll definitely be hard to beat 2018. The biggest thanks, as always, to everyone who came out for a Matchbox Cineclub event – you’re the ones who make it worthwhile. We always love to hear from you, so if you have any thoughts on the past year, or the next, please let us know. In the meantime, here’s our 2018 in pictures…

Cage-a-rama | After years of standalone pop-ups and our monthly residencies,  this was our first time trying a new format, the micro-festival: six films over three days and as much bonus content as we could cram in. Selling it out in the early days of January gave us the encouragement to keep going. Which is a bigger deal than it maybe sounds. We couldn’t have done it without the Centre for Contemporary Arts and Park Circus supporting what we do, and of course all the Cage fans, who came from across the UK and as far afield as Dresden, Germany. We’re very much looking forward to Cage-a-rama 2: Cage Uncaged in January 2019.

Team Matchbox win the Glasgow Film Festival 2018 Quiz | Technically, Team GFF won, but since there were 18 of them and they had the inside scoop on their own programme, they were disqualified. We credit our victory to our ace in the hole, cine-savant Josh Slater-Williams. Also to the Nicolas Cage round. Thanks to the lovely Tony Harris (of Team GFF) for the photo!

Turkish Star Wars 2K world premiere | A while back, our pal Ed Glaser came into possession of the only remaining 35mm print of Dünyayı Kurtaran Adam, AKA Turkish Star Wars. Once it was all cleaned up and newly translated subtitles added, we had the chance to host the world premiere of the 2K restoration (simultaneously with our pals Remakesploitation film club in London). The May 4th screening was sold out but free entry. To cover our technician Pat’s wages, we took donations (and as usual spent way too much time on special graphics for the occasion).

Ela Orleans takes Cowards Bend the Knee to Alchemy | Our musical hero and good pal Ela Orleans took her live score for Guy Maddin’s Cowards Bend The Knee to the Alchemy Film and Moving Image Festival in May. We originally commissioned Ela to write and perform her incredible new score during Scalarama 2017. Of course, 100% of the glory for the performances (Ela also later took Cowards to the Festival Periferia in Huesta, Spain), goes to Ela herself, but we’re very proud of the small part we have to play in the ongoing project. And, if you look very closely, you can see our logo in Alchemy’s Programme Partners on the screen behind Ela!

Weird Weekend | After Cage-a-rama was a success, we wanted to do something similar in the format but with Matchbox’s more typical programming – the outcasts, orphans and outliers of cinema. So, Weird Weekend was born and Scotland’s first festival dedicated to cult cinema took place at CCA in June. Over two days, we mixed cult favourites with lost classics and brand-new films and welcomed guests like The Secret Adventures of Tom Thumb cinematographer Frank Passingham, Crime Wave star Eva Kovacs and Top Knot Detective co-directors Dominic Pearce and Aaron McCann. We also programmed a retrospective of our favourite local filmmaker Bryan M Ferguson’s shorts, and Bryan joined us for a post-screening Q&A. See Bryan’s latest work, including his celebrated music video for Ladytron,  here: bryanmferguson.co.uk.

Alex Winter Q&A | The one and only Bill of Bill & Ted fame joined us via Skype after we screened his directorial debut Freaked at Weird Weekend. It was a fantastic screening and Q&A, all of it a mildly surreal high point. The whole thing was made totally normal, though, by the coolness of Alex and his team, who were also incredibly gracious in supporting our event with a bunch of press interviews. Of course, Alex is about to make Bill & Ted Face The Music, but these days he’s a pretty deadly documentary maker. See what he’s up to now: alexwinter.com.

Our founder returns | Matchbox Cineclub founder (lately of Paradise and Moriarty Explorers Club and, most recently, Trasho Biblio) Tommy McCormick returned for a cameo at Weird Weekend. Screening Soho Ishii’s The Crazy Family was a long-held ambition for Tommy, so when we managed to confirm a screening for Weird Weekend, he returned to pass on Ishii’s special message for the audience.

The Astrologer | We closed Weird Weekend with the Scottish premiere (and only the second UK screening) of Craig Denney’s The Astrologer (1976), such a deep cut that it can only be seen at screenings – no DVD, no VHS, no streaming, no torrent and very little chance it can ever be released. Bringing the DCP over from the States would have been 100% worth it anyway, before an unexpected onscreen mention for Glasgow melted everyone’s minds. Before all that, though, we got carried away with researching the mysterious and largely unreported story behind it and ending up writing the definitive 4,000-word article on it. Read it here! 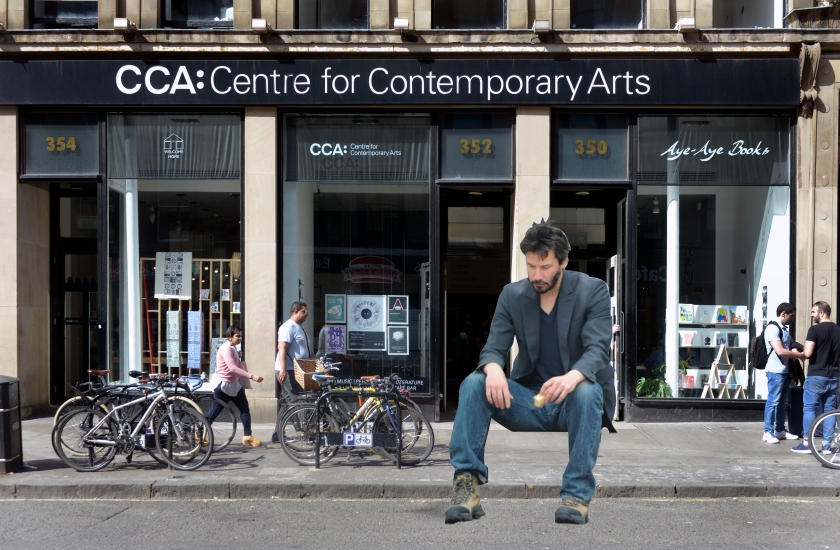 CCA Closure | KeanuCon postponed! After Cage-a-rama, we polled the audience to see which icon we might celebrate next – Merylpalooza had a good run but Keanu was the clear winner. We debuted our trailer at a GFT late night classic screening of Speed in March and scheduled KeanuCon for the opening weekend of Scalarama in September. Unfortunately, the GSA fire meant the nearby CCA was forced to remain closed indefinitely and, try as we might, we couldn’t find a suitable alternative venue for the dates. On the bright side, our Keanu Reeves film festival will finally arrive in April 2019. And it was all almost worth it for our Sad KeanuCon image.

The World’s Greatest 3D Film Club | In July, our pals at Nice N Sleazy invited us to programme something there at the last minute. Their only specifications were for it to be something vaguely summery and fun. We had a bunch of red-blue anaglyph 3D glasses left over from when we screened Comin’ At Ya at The Old Hairdressers a couple of years ago, so we decided to screen Jaws 3D. When Sleazies had other free dates to fill, we later showed Friday 13th Part III and 1961 Canadian horror The Mask.

Scalarama | We took a lead role in coordinating Scalarama activity across Scotland again this September. KeanuCon was meant to open activities in Glasgow, but luckily Pity Party Film Club were able to fill the void with an incredible Hedwig and the Angry Inch event. We also hosted a sold-out screening of B-movie documentary Images of Apartheid at Kinning Park Complex, teamed-up with Video Namaste for another Video Bacchanal, this time at The Old Hairdressers, and screened Joe Dante’s epic The Movie Orgy (see below). Before all that, though, we hosted the Scalarama Scotland 2018 programme launch in August at the Seamore Neighbourhood Cinema in Maryhill, with a special Odorama screening of John Waters Polyester. Our pal Puke (pictured) volunteered as a Francine Fishpaw ring girl to cue the scratch and sniff action. Joe Dante’s The Movie Orgy | We’d wanted to host this for a really long time and it took a lot of leg work, including a last-minute zoom to Edinburgh International Film Festival, to finally make happen. But it did! And, incredibly, Joe Dante himself recorded us an intro (pictured), after EIFF’s iconic Niall Greig Fulton introduced us to him in June and we got the OK to screen it. With CCA still closed, we had the opportunity to return to our old home, The Old Hairdressers, for this five-hour, sold-out screening. The film editor of the Skinny called it “Scotland’s movie event of the year”, which is daft but also we’ll take it.

#WeirdHorror with Kate Dickie | We started off the Halloween season doing a 31 days of #WeirdHorror countdown, then when CCA’s oft-postponed opening was finally confirmed, we offered to do some last-minute screenings. The idea was to celebrate CCA reopening and maybe help spread the word – which, it was super busy anyway but it was a great opportunity to team up with our pals Pity Party Film Club and She’s En Scene for some co-screenings. The four-night pop-up series had an amazing climax with legendary local hero Kate Dickie very graciously joining us for The Witch and an in-depth Q&A afterwards.

Matchbox Birthday Cake | Finally, this was just a very nice birthday surprise. Coming up in 2019, though, we have a LOT of surprises in store. First up, Cage-a-rama 2, Auld Lang Vine and KeanuCon. See you there!

Or get in touch directly: info@matchboxcineclub.com