“No letter today. I wrote to R over three weeks ago, and still no answer. Maybe he never got my letter. Maybe some jealous secretary got her hands on it and decided not to give it to him. Because she could tell I love him more than she does. Really love him.”

Although written and directed by a man – prolific German filmmaker Eckhart Schmidt – 1982 cult horror Der Fan is one of the most convincing depictions of female fandom, obsession and desire in cinema. Its descent into cartoon excess represents the heightened fantasy end point of pop star adulation, but it is grounded in uncomfortable truths.

Der Fan follows German teenager Simone, who is disengaged and almost catatonic as she sleepwalks through the drudgery of her home and school life. She barely speaks, but through her narration we discover the reason for her vegetative state: her every waking moment is devoted to intense thoughts of R, a new-wave pop star who she adores above anything else. Her bedroom walls are covered in monochrome images of him, and she listens to his songs via an omnipresent cassette Walkman that separates her from the real world. She no longer pays attention to schoolwork: “What’s the use? I can’t think of anything except R and how much I need him.”

The signifiers of fandom are familiar, but the execution is unusual. Rather than a depiction of the (often communal) hysterical excitement of fangirls, Der Fan traces its solitary, destructive flipside. It’s telling that the film’s alternative English title is Trance: Simone’s desire is so all-encompassing that other people fail to register — her teachers, parents, more appropriate romantic suitors. Her unreciprocated obsession is so all-encompassing that it becomes destructive; cancelling out its mundane surroundings.

Simone’s desire has left her with a one-track mind in the centre of a void, wandering the streets in a fugue state. The film’s atmosphere is a dull ache: rain and suburban streets and municipal buildings. R’s music is the kind typically made by inhabitants of these post-industrial landscapes – the soundtrack by Düsseldorf group Rheingold recalls the driving empty urbanity of Joy Division or Bauhaus.

Simone has written R a letter to which he hasn’t responded. Every day she drags her feet to the post office in anticipation of his reply; a voiceover counting the days like a prison sentence. When she tires of waiting, she tracks him down outside a TV studio, and they finally meet. Simone is speechless — she collapses and he rescues her, taking her inside the studio to watch his performance being filmed.

The link between the devotion of pop fandom and the manipulative power of political dictatorship is often made in films about charismatic pop stars – most recently in Brady Corbet’s twin films Childhood of a Leader and Vox Lux. The allusion is sometimes clunky: in Der Fan, images of mass-saluting crowds are interspersed with images of R in Simone’s bedroom; in the television performance that Simone watches, R wears a militaristic uniform surrounded by saluting mannequins. The sinister creep of R’s power is more subtly expressed in the similarity between R and Simone when they finally meet, both wearing almost identical outfits of white shirts and dark leather trousers. This could be read as a symbol of R’s control over Simone (and others – his secretary is also seen in a similar outfit) but also of Simone’s desire to possess him so much that she literally starts to become him: an under-reported but fundamental manifestation of fandom.

This desire is made explicit (and then some) in the film’s audacious final act. After their meeting at the television studio, R takes Simone to his friend’s empty apartment where they have sex. After this ultimate act of wish-fulfilment, R disappoints Simone with his aloofness – his desire for a simple one night stand not matching up to her overwhelming need for him. The film’s final twist sees her react with extreme and perverted violence. 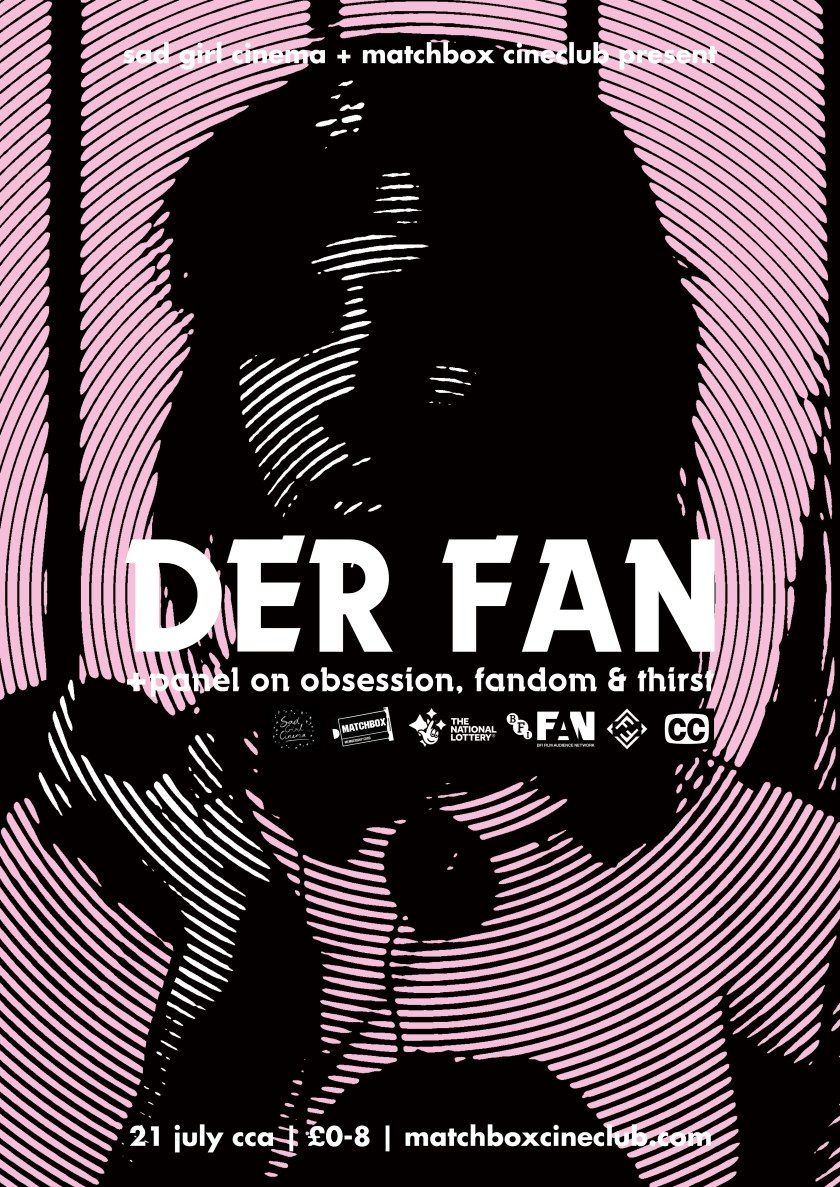 While committing this strange violence, Simone is single-minded and determined, her demeanour as trance-like as when she was yearning for R at the start of the film. She’s detached and withdrawn, an empty vessel. If obsession destroys everything around the object of desire, it’s no surprise that it will eventually start to erode the self, too. So much of Simone’s sense of self is constructed around her desire for R, and her desire for R is constructed around a fiction of her own creation. Like so many relationships between fan and fan-object, Simone projects her own base needs onto the empty vessel of a pop star. He can be anything she needs him to be. Even his single-letter name is ripe for projection – a hyper-concentrated version of the iconic mononymous pop star. Nobody knows what the ‘R’ stands for, so it could stand for anything. His post-punk voice is monotonous and anonymous, but Simone fills it with subjective meaning: “He always sings with that same voice, but to me it sounds different every time.” This projection is disrupted once Simone meets the ‘real’ R. When the fan-object disintegrates into nothing, the fan’s whole sense of self is in flux.

Although it presents an extreme manifestation of fandom and obsession, Der Fan’s depiction of desire as a nihilistic force is rooted in truth. It can also be argued as a subtly feminist film: its moral could be that female desire is deadly and destructive, something for men to be afraid of — but also that desire for men is destructive for women too. So many narratives around fandom are rooted in pop stars’ potential to ‘save’ their fans, but Der Fan suggests they can just as easily destroy them — or help them to destroy themselves.

Der Fan screens on Sunday 21/07 at Centre for Contemporary Arts, Glasgow, followed by a panel discussion on obsession, fandom and thirst, moderated by Claire Biddles.

Tickets are on sale via Matchbox Cineclub’s online shop here, and are priced on a sliding scale, according to your means.

Matchbox Cineclub team with Sad Girl Cinema to present a rare screening of a cult German horror and a panel discussion on obsession, fandom and thirst 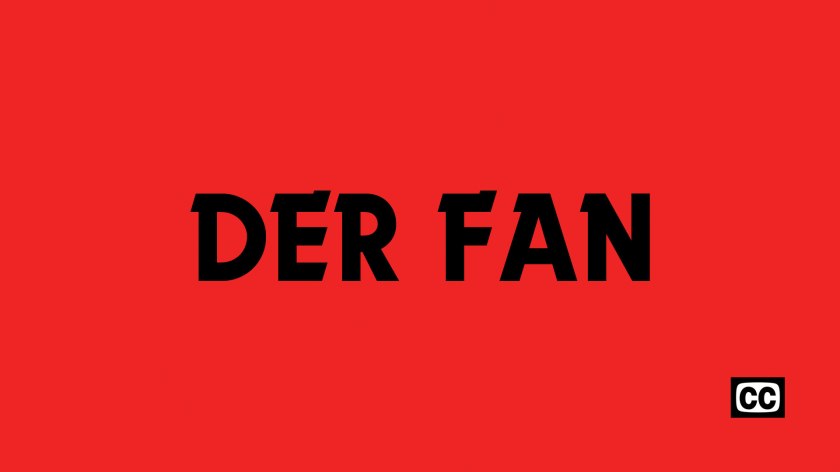 We’re thrilled to be teaming up with Sad Girl Cinema to present a rare screening of the cult ’80s German horror Der Fan (Eckhart Schmidt, 1982) followed by an expert panel on obsession, thirst and fandom.

Der Fan follows teenage Simone’s obsession with singer R. When they finally meet, R is everything Simone needs him to be, taking her into his arms and fulfilling her dreams. But R’s intentions are not as pure and loving as Simone’s. The shocking consequences make Der Fan an undeniable cult gem, as well as an analytical exploration of obsession gone too far.

The panel will discuss their own thoughts on how ‘thirst’ and obsession can drive and impact cultural consumption, in regards to sexuality, professionalism and creative output. How do we consume culture in relation to our own sexual desire and obsessions, and how do we express our desire in response, through creative work and cultural criticism? How do we maintain boundaries with regards to our obsessions? Is ‘thirst’ the new normal for cultural consumers and creators? And what do we even mean by ‘thirst’?

Der Fan screens at Centre for Contemporary Arts, Glasgow, on Sunday 21/07. Tickets are on sale via our online shop here. Tickets are priced on a sliding scale, based on your circumstances. There are three tiers: Free/£2, £4/£6 and £8. (register for a free ticket via tickets@matchboxcineclub.com). Read our guide on what to pay: bit.ly/slidingscaleguide

NB The film is in German and will be captioned in English for the deaf and hard of hearing.

The screening is part of Film Feels: Obsession, a UK-wide cinema season, supported by the The National Lottery and BFI Film Audience Network. Explore all films and events at http://www.filmfeels.co.uk.

Matchbox Cine is an independent exhibitor of outcasts, orphans and outliers. Based in Glasgow, Scotland, we programme, curate and promote cult film events across the UK, including the festivals Cage-a-rama, KeanuCon and Weird Weekend.