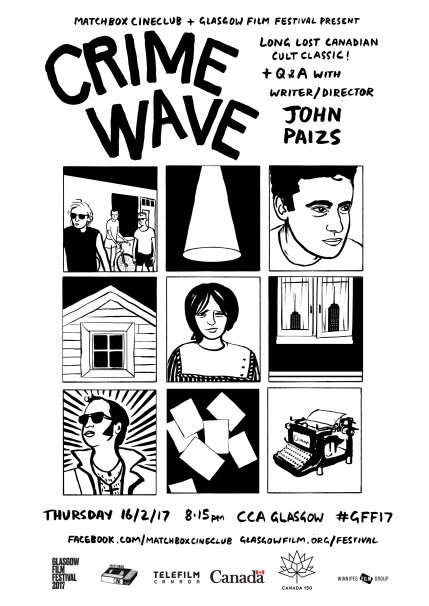 Crime Wave centres around awkward loner Steven Penny (John Paizs), who turns out bizarre scenarios for colour crime movies. Steven wants to turn in the best colour crime movie ever, but he has a problem – he can only write beginnings and ends to his scripts. No middles! Living above a family garage in suburbia and befriended by the landlord’s ten-year-old daughter (Eva Kovacs), Steven toils on his scripts, zany ideas based on get-rich-quick schemes. Finally frustrated by his creative block, he sets out for Kansas to meet Dr Jolly (Neil Lawrie), a mysterious script doctor who promises to put him out of his misery.

“Imagine if Steve Buscemi’s character from Ghost World made a movie, with levels of deadpan that make Jim Jarmusch look like Baz Luhrmann… but with a lurid perversion in every lovingly Bolexed frame that would make Baz blush.” Castle Cinema

“It’s a joyous, uninhibited film, with each frame fit to burst with visual jokes and ideas. Scenes resemble at times live action Far Side panels, delivering buckets of deadpan, obsidian-black comedy. If there’s a funnier Canadian film out there, we haven’t seen it.” The Skinny

We first screened John Paizs’ incredible lost classic Crime Wave at Glasgow Film Festival 2017. Thanks to GFF’s partnership, not only were we able to bring John across for the screening, we also screened TIFF‘s 2K digital restoration of the film, the first time audiences outside North America had seen it. We then partnered with Canadian distributors Winnipeg Film Group to bring Crime Wave back for a series of screenings, first for Scalarama in September, and then across the UK throughout October and November.

Now, thanks to the Castle Cinema in London (and some final testing at the Grosvenor Cinema, Glasgow), we have our very own DCP to screen from. A DCP is essentially the digital version of a 35mm print. Having one in the UK will hopefully lead to many, many more screenings of John’s amazing, criminally underseen film. Read more about Crime Wave:

John Paizs interview (Behind The Curtain)

Matchbox Cineclub are acting as proxy for Winnipeg Film Group in booking UK screenings. If you’d like to book a UK/DCP screening of Crime Wave, email us for details/terms: info@matchboxcineclub.com