Frank and Lindsay have a lot in common: they both hate the bride, the groom, the wedding, themselves, and most especially each other. For 72 hours, they are trespassers in paradise.  But the weekend’s relentless events continually force them together, and if you fight with someone long enough, anything can happen. When the instinct to love proves very difficult to kill, they must decide which is stronger: their hearts or their common sense.

Destination Wedding is Keanu and Winona’s fourth onscreen coupling since filming 1992’s Bram Stoker’s Dracula – during which Ryder insists the two were married for real (director Francis Ford Coppola confirms the wedding scene he filmed could be legally binding).

Of his character, Keanu says, “I liked his wit and his suffering. You root for Frank. I root for Frank. He’s trying to overcome his past when he meets Lindsay and finds himself attracted to her.” But, on the other hand, “Love is good for other people, but he knows it will just end in disaster for him. So, why bother? Save yourself the pain.”

Producer Lyon says, “Keanu has a natural sense of timing and delivery. He is a hilariously funny person with a dry sense of humour and just a pleasure to work with. I think it was fun for him to demonstrate a side that hasn’t been seen before and allows him to show a piece of who he is as a person.”

However, while we’re happy that KeanuCon will end well, we’re not sure Destination Wedding will, especially if we take into account this poster capitalising on Keanu’s recent John Wick success, which purports to be for the Thai release of the film… 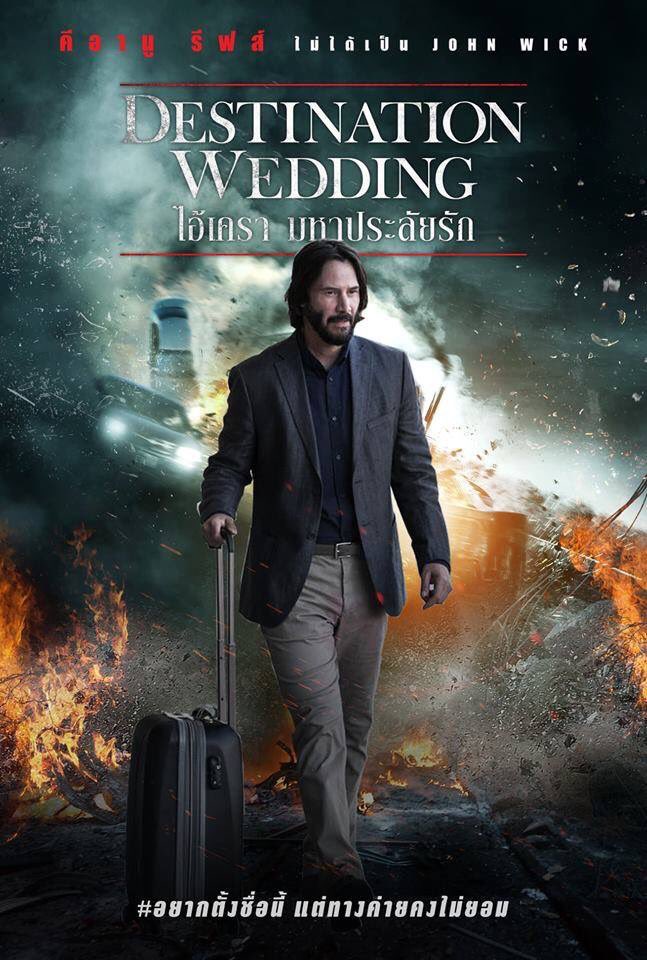 Matchbox Cineclub’s KeanuCon features ten and a half films over two days, including My Own Private Idaho, Speed, The Matrix, Constantine, Keanu’s directorial debut, Man of Tai Chi, and John Wick. There will be a rare screening of Keanu’s first lead role in a Hollywood feature, Permanent Record, accompanied by an even rarer outing for his film debut in the National Film Board of Canada short, One Step Away.

Day two closes with a double bill of Bill & Ted’s Excellent Adventure and Bill & Ted’s Bogus Journey, followed by a live performance from Wyld Stallyns, before KeanuCon 2019 closes with the UK premiere of Destination Wedding.

Weekend Passes for KeanuCon are sold out; very limited single tickets are on sale via our online shop.